This website (here) shows a wonderful selection of images of an RAF airman, Wing Commander Joseph Reginald Cyril Lane, who had a remarkable career, from initially maintaining aircraft, as a Cranwell-trained Fitter then remustering to fly, including for the (then) RAF's Fleet Air Arm on the Royal Navy's carriers, and after service in W.W.II even more interesting times.  The downloadable PDF story written up by his son, here, is well worth a read.

Here (reproduced with acknowledgement to the originator, his son, and website Maritime Quest) are a couple of the photographs that particularly caught my eye, and a couple I'll comment on.  But it's highly recommended that you go to the site and have a look through the lot. 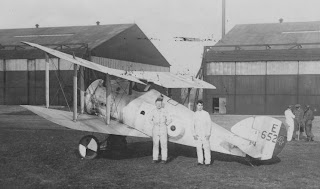 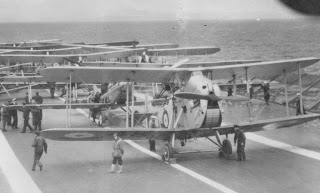 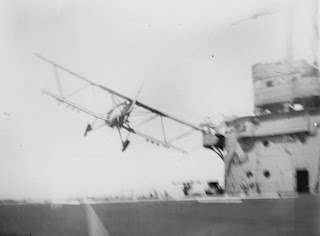 A Blackburn Shark striking the superstructure of HMS Courageous. 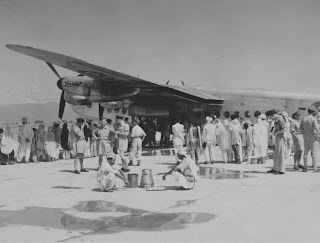 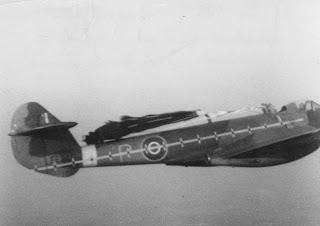 1951: A Gloster Meteor (pilot S/Ldr George Devine) with a malfunctioning parachute during a test from RAE Farnborough.

I believe this is a test aircraft (note the 'P' prototype and camera possibly Martin Baker, with a dummy, early post-war ejection seat, possibly with a snagged parachute. More detail from a reader welcome! 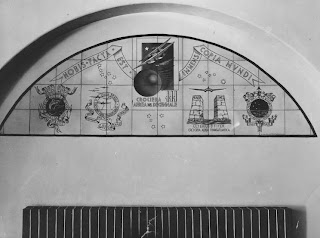 Fascinating item, from the location where the great Italian aviator Italo Balbo was shot down by friendly fire. 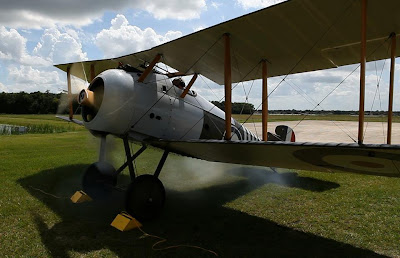 "Ran the Sopwith Snipe again today and got to taxi it around quite a bit. The Bentley engine is a bit more sensitive to the fuel/air mixture than what I've been used to flying with the Gnomes and LeRhone's. Of course, it's a hundred and fifty horsepower more than an engine in a Sopwith Pup!

While taxiing on the ground . . . it seems to turn reasonably tight to the right with a bit of throttle and forward stick but not as well to the left. A pilot must think ahead when turning around on a narrow runway (125' wide!) with a crosswind to make sure he doesn't go off the side and into a fence or swamp! Remember, there are NO BRAKES!

The Bentley actually has better throttle-ability than other rotaries I've flown and can throttle back to about 500 rpm without having to use the blip switch, which is actually slow enough to stop on the grass. You can't do that with a Sopwith Pup with an 80 hp engine and a minimum idle rpm of 800. You HAVE to use the blip switch to slow down.

At higher power settings and powering up, the Bentley is a lot less forgiving than a LeRhone and is very sensitive to getting the air/fuel mixture just right. It's easy to be either too lean or too rich and let's you know by either banging, backfiring, or just quitting!

On LeRhone Rotaries and this Bentley, the pilot has two levers to control the power - one for air and one for fuel.

Think about that and understand . . . With this set up . . . the PILOT IS THE CARBURETOR!

There were a few things I told the guys to tweak as I ran offsite for an all day appointment.


Thanks for the insights, Kermit.
Posted by Vintage Aero Writer at 11:22 PM No comments: Links to this post

I was asked the question 'What was the significance of KLM's DC-2 in history?' This was the answer.

It's difficult today to appreciate the effect the DC-2 PH-AJU had at the time. Although brand-new, and top-of-the-line it was also just a standard airliner. In the 1934 air race, despite flying an extended stopping KLM route it came second only to a dedicated, newly-designed and built racing aircraft. It's like a new bus coming second at Bathurst, while dropping off passengers at the bus stops. 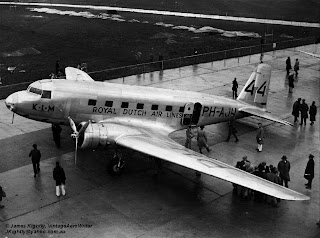 The Uiver at Mildenhall in 1934. (James Kightly collection via Flightpath magazine)

With its tailwheel setup the DC-2 looks old fashioned today, but in 1934, in gleaming polished silver with patriotic Dutch orange letters on the upper wing, it personified the machine age and art-deco modernism - and flew. The men aboard this wonder became heroes beyond levels we see today.

The world wide interest in the race was all Sir Macpherson Robertson could have hoped for and more. Even over seventy years later it remains the most important air-race ever. Only an event like the moon landing had a greater public awareness; bearing in mind that in 1934 it was all dependent on telegrams, newspapers and, critically, radio. It was through the radio broadcasts that the race was followed in real time, in the UK, Australia, Holland, the USA and the rest of the world, and it was radio that caught and saved Uiver over Albury.

Radio and the race put Albury on the map for a world wide audience and the townspeople can be proud of their remarkable efforts to save the DC-2 and to help it place so high in the race.

Prior to commercial aviation's development, Australia had only been connected to the world by shipping and undersea cables. Today most of us would find it inconceivable how critical radio and the undersea cable was in moving information. No internet, fax or e-mail in 1934 of course, and newspapers couldn't physically move faster than an aeroplane carrying them. In 1934 technology became good enough for airliners to work on one of the world's longest and most challenging routes. Times for goods and people being moved to and from the Australian continent were slashed from weeks or months to just days. 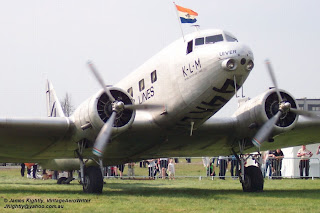 The airworthy Dutch DC2 in Uiver colours at the Coventry Airshow. (James Kightly)

The Douglas DC-2 was the best airliner in the world at the time. Interestingly, many of its innovative features are still critical in modern airliners. It was a low-wing, multi-engine, stressed-skin (that means the skin carries the structural loads - like an egg) machine with an enclosed cockpit and retractable undercarriage. All these features still appear in the 747 Jumbo Jet and the brand new Airbus A-340. The slightly enlarged DC-3 (developed from the DC-2) was the first airliner in history able to earn a profit flying passengers.

We complain about packed cabins and 'jetlag'; the weather is an inconvenience, but without the efforts of all those people who made the great air race of 1934 such as a remarkable proof of the capability of this new airliner, we might not have the service we take for granted.
Hindsight clearly shows that the British Empire had no airliner that could compete; de Havilland, makers of the special winning Comet Racer, had their best airliner in the race. The mis-named de Havilland Dragon Rapide turned up days later in Melbourne. At that point, some realised that we needed to consider American aircraft because British types just weren't good enough. 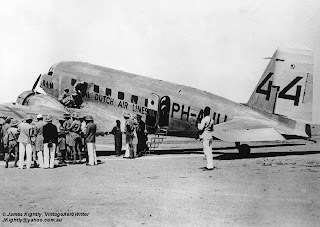 The Uiver at Tanken Karachi during the 1934 London to Melbourne Air Race. (James Kightly collection via Flightpath magazine)

When Lawrence Wackett in 1936 chose a type of the newly formed Commonwealth Aircraft Corporation to build, he chose the North American NA-16, which became the Wirraway. That aircraft had the same wing design as the DC-2. When Holymans Airways lost several wooden de Havilland airliners for unexplained reasons in the 30s, Holyman's damned the Empire First demands and at extra tax cost bought DC-2s in 1936. QANTAS couldn't have bought DC-2s; they weren't allowed to as they weren't a British type, so it was KLM, one of the greatest airlines, to show how airline flying should happen. 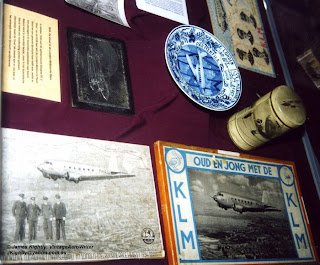 An array of the gifts and commemorative items made in Holland to celebrate the success of Uiver on display at the Aviodome Museum. (James Kightly)

KLM were delighted to show their mettle in this race, but one of their key selling points also saved Uiver. Taking a professional airline approach, flying fast, safely and sticking to the route and plan, was the future and a lifesaver. Parmentier and Moll were specially picked, but they were also 'just' airline pilots. Having a trustworthy, trained, aircrew, not a 'hot shot' remains a critical part of airline flying right through to today.

When it all went bad for the KLM team in that October storm in 1934, that professionalism was one of the things that saved them, and while those Dutch-Albury connections were being forged on the ground, observers around the world were noting that KLM had set the standard, both in predictable airline flying and when the pressure and near disaster came in. Without the people of Albury that achievement could have all come to naught.

There were precious lives at stake in 1934, and they were saved. In the early twenty-first century, there are few precious DC-2s left. There are less than nine complete examples. Only two have been returned to flight in the world, as I write. Albury is lucky to have an example, but it desperately needs funding to restore it to showroom condition after decades outside at the airport. Another is in the hands of the aircraft museum at Moorrabbin, awaiting rebuild. In Holland, the Aviodrome operate one DC-2, as do the Museum of Flight in the USA. We need more people prepared not to forget them, particularly Albury's own. 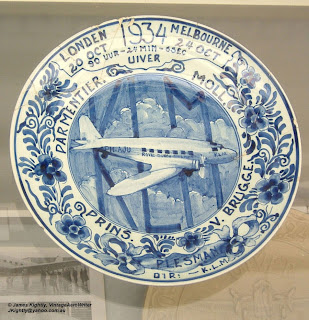 A Dutch blue plate to celebrate the success of Uiver on display at the Aviodome Museum. (James Kightly)

As an aviation writer, I'm all too used to finding that the legend has grown and real story turns out to be a shadow of the myth. The story of 2CO radio, Albury's remarkable people and the Uiver's crew are one of the few occasions where the legend is less amazing than the true facts.

It's ironic that one effect of the race driven by Melbourne-booster Sir MacPherson Robertson was that the switch from sea to air transport moved the usual Australia terminus of the routes from Melbourne, a good terminus for ships, to Sydney. Sydney is a closer arrival point for aircraft from Europe or the Americas.

However, the people of Albury's inspired and selfless efforts on that real 'dark and stormy night' wrote a true story that no fiction author would dare to propose, and is a moment in history never to forget.

James Kightly is an aviation writer and publisher, and a Contributing Editor to Australia's Flightpath magazine.