It's not unusual to find a Hollywood star in a bizarre looking promotional still photograph. But sometimes there remains a question behind it. A while ago, I came across this image of Rita Hayworth, with another woman, embracing a very large bomb. What is particularly odd about it, beyond the oddness of the image itself, is that these bombs seem to be a set of Nazi era German bombs, in fact the main blast bombs of the period used by the Luftwaffe. There are some more conventional photos of most of these bombs linked here, confirming that the examples in the Hayworth still are the real size - presumably the real thing. 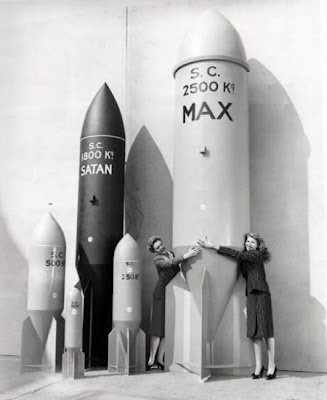 Yes, Max is that big, and we'll just go straight past all the obvious jokes. But why would Rita be set up to have her picture taken with these (is it as obvious as that she was a 'bombshell' of the time?). And who is the other woman? Another actress? There's no film of Rita's that seems to relate to the need to happily embrace large German bombs, so there's no obvious connection there.

And of particular interest - and the reason for the post - how or why would the image be with a set of German bombs, rather than the more obvious and likely American munitions? It could be that a set of clearly labelled German bombs were on show for another purpose, at a location such as Freeman Field where the great post-war display of Axis aircraft was put on. This enquiring mind would like to know - so over to you dear reader.

There is a 'PS'. Rita's likeness was allegedly attached to the Bikini Atoll atomic bomb, but that appears to be a myth, as explored here.
Posted by Vintage Aero Writer at 4:51 PM 3 comments: Links to this post