Sometimes one discovers a type and story that one had never previously encountered. Although a sad story, the brief career of the Lascurain Aura was a fascinating - and to me - new tale. 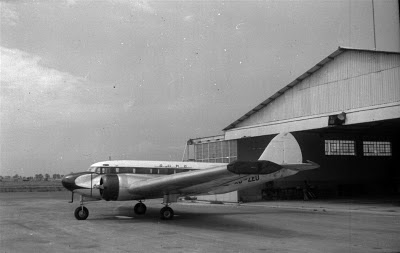 This was the 1957 Lascurain Aura. The Aura was at the time the most advanced design from the tiny Mexican aircraft industry, but only one was built. It was lost in a fatal accident that killed the test pilot and also the designer Lascurain - undoubtedly a key reason the machine is not more widely known. 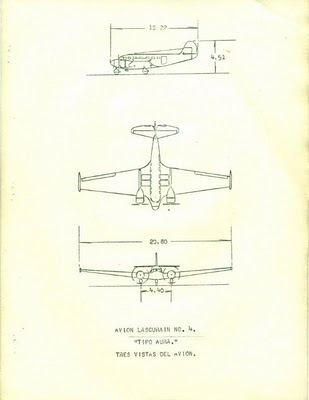 Lascurain's aircraft was an ambitious project: to provide Mexico with a twin-engine aircraft with capacity for 14 passengers able to operate on short routes at high altitude and off rudimentary runways. He called it 'Aura' (Dawn) and it was equipped with two 245 hp Jacobs engines enabling a cruising speed of 200 km/h (125mph).

Tragically, during a test flight on 24 December 1957, Lascurain decided to accompany the test pilot, one Carlos Castillo Segura. On take off the Aura's engines stopped and the pilot tried to turn back to the runway, but the landing gear hit a ditch, causing the aircraft to crash and the death of their two occupants Lascurain and Castillo. 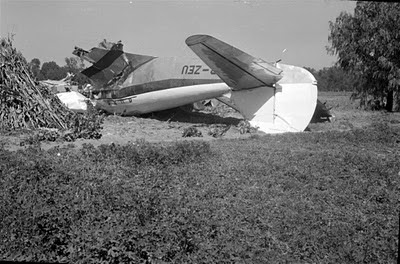 A remarkable insight into this unique aircraft is this five minute film, which shows rare detail of the machine, and gives, I think, a flavour of the excitement and optimism of the designer and pilot - featured as two subjects in this movie.

What would have happened if there had not been this tragic crash? The Aura has the look of a Lockheed 10 or Beech 18 but with a fixed tricycle undercarriage, and a thick wing (incorporating baggage containers, seen in the film, just like the Lockheed 10). The fuselage interior seems narrow (for two rows of seats) but may have been viable.

It would have been difficult to have been competitive with the war-surplus light transports available, and bigger aircraft like the DC-3. One thinks of another fixed-gear specialised postwar feederliner (the DHA Drover) that found it difficult to expand its niche into a profitable space.

Aesthetically, the design has some lovely cues, with a delicate tail 'signature' and a curvaceous structure, although the nose seems a little stumpy, and I'm nonplussed as to the purpose of the wingtip blocks. It would have been a complex aircraft to build, although perhaps with simple systems. 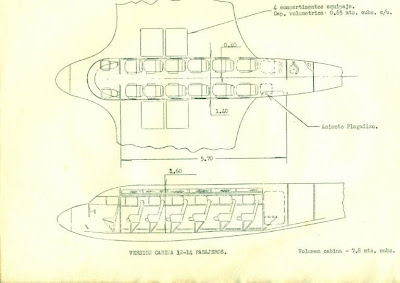 But who knows? The crash brought a remarkable designer's life to a premature end, and also ended the dream of a successful specialised Mexican airliner.

[With thanks to 'aguilanegra4' on YouTube, and 'Kwinopal' on the Key Forum, the latter bringing the aircraft to my attention, and posting the attached images in this thread.]
Posted by Vintage Aero Writer at 10:21 PM 5 comments: Links to this post The first of many Mosquitos takes flight. Via the Mosquito Aircraft Association of Australia.

The prototype de Havilland Mosquito, W4050, celebrates 70 years since its first flight. This, the original day bomber prototype, was rolled out on 19 November 1940, and first flew on 25 November, only 10 months after the go-ahead from the British Air Ministry. The original estimates were that as the Mosquito prototype had twice the surface area and over twice the weight of the 1940 Spitfire Mk II, but also with twice its power, the Mosquito would end up being 20 mph faster. Over the next few months, W4050 surpassed this estimate, easily beating the Spitfire Mk II in testing at RAF Boscombe Down in February 1941 at a top speed of 392 mph at 22,000 ft altitude, compared to a top speed of 360 mph at 19,500 ft for the Spitfire.

Unlike almost all other prototype aircraft from the era, this one survives, and in good hands. As Bruce Gordon of the de Havilland Heritage Centre (the aircraft's long-term home) reports:

"70 years on, she is one of very few surviving wartime prototype aircraft and is currently undergoing an exhaustive restoration at the de Havilland Aircraft Museum. In the next few weeks, she will be dismantled into her component parts for the first time since 1959, to enable detailed work to continue." 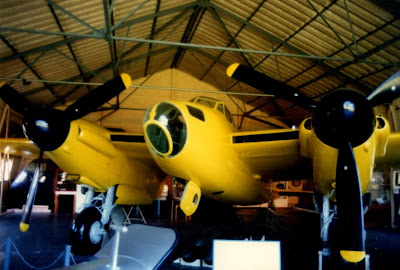 A grand milestone in preservation and history.
Posted by Vintage Aero Writer at 10:47 PM No comments: Links to this post

Refound in this thread on the Key forum, and brought back to my memory by this discussion on Brett's Airminded blog, here's a Bomber Command poem I particularly like. 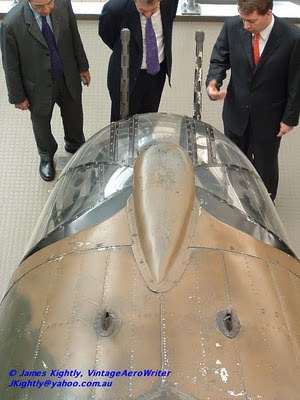 For me, the poem sums up some of the diversity of the contribution from within the UK and outside. Although titled 'Lancasters' it stands well, I think, for all of the Command and the crews of the less well remembered types. Found in Martin Bowman's excellent 'The Royal Air Force at War'.

Where are the bombers, the Lancs on the runways,
Snub-nosed and roaring and black-faced and dour,
Full up with aircrew and window and ammo
And dirty great cookies to drop on the Ruhr?

Where are the pilots, the navs and air-gunners,
WOP's and bomb-aimers and flight engineers,
Lads who were bank clerks and milkmen and teachers,
Carpenters, lawyers, and grocers and peers?

Geordies and Cockneys and Wiltshire moon-rakers,
Little dark men from the valleys of Wales,
Manxmen, Devonians, Midlanders, Scouses,
Jocks from the Highlands and Tykes from the Dales?

Where are the Aussies, the sports and the cobbers,
Talking of cricket and sheilas and grog,
Flying their Lanes over Hamburg and Stettin
And back to the Lincolnshire wintertime bog?

Where are the flyers from Canada's prairies,
From cities and forests, determined to win,
Thumbing their noses at Goering's Luftwaffe
And busily dropping their bombs on Berlin? 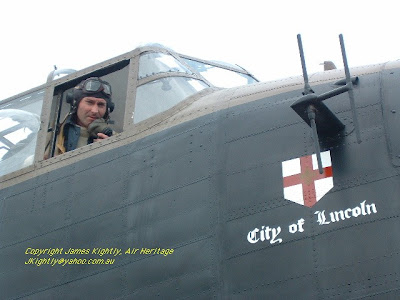 A reenactor in the RAF's airworthy Lancaster PA474 seen in 2003 at the Royal International Air Tattoo. James Kightly.

Where are the Poles with their gaiety and sadness,
All with the most unpronounceable names,
Silently, ruthlessly flying in vengeance,
Remembering their homes and their country in flames?

Where arc the Kiwis who left all the sunshine
For bleak windy airfields and fenland and dyke,
Playing wild Mess clinics like high cockalorum,
And knocking the Hell out of Hitler's Third Reich?

Where are the Poles with their gaiety and sadness,
All with the most unpronounceable names,
Silently, ruthlessly flying in vengeance,
Remembering their homes and their country in flames?

Where arc the Kiwis who left all the sunshine
For bleak windy airfields and fenland and dyke,
Playing wild Mess clinics like high cockalorum,
And knocking the Hell out of Hitler's Third Reich?

Where are they now, those young men of all nations,
Who flew though they knew not what might lie ahead,
And those who returned with their mission accomplished
And next night would beat up the Saracen's Head?

The Lancs are no more, they are part of legend,
But memory stays bright in the hearts of the men
Who loved them and flew them through flak and through hellfire
And, managed to land them in England, again.

The men who were lucky to live to see victory,
The men who went home to their jobs and their wives,
The men who can tell their grandchildren with pride
Of the bomber which helped to save millions of lives. 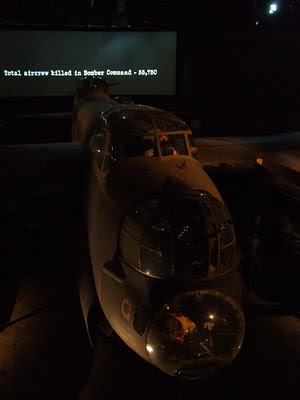 Audrey is the widow of an RAF pilot, and while the poem may not achieve greatness as a poem for some, the reason for its creation is more than good enough for me. In this August 2010 BBC report on her, it mentions:

As the Battle of Britain began, Audrey was just 18-years-old and working for the BBC's variety department - helping to keep the population entertained during some of this country's darkest days.

Posted by Vintage Aero Writer at 11:04 AM No comments: Links to this post 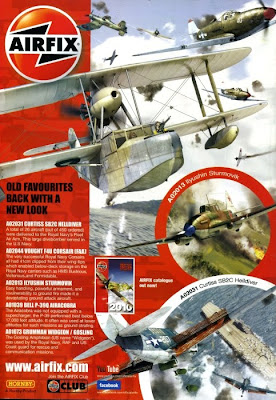 Looks like the Airfix brief didn't quite check the list of aircraft in the image against the aircraft advertised.

Much as I like the Grumman designs, it's nicer to see a Supermarine Walrus image.
Posted by Vintage Aero Writer at 10:01 PM No comments: Links to this post

Seventy-five years ago on this date, George P.W.S. Bullman took the prototype Hawker Hurricane, K5083, designed by Sir Sidney Camm, into the air from the airfield at Brooklands, Surrey.

It was (despite the focus on the more famous sister aircraft) the decisive aircraft in the Battle of Britain, five short years after that first flight. Hurricane pilots accounted for more enemy aircraft shot down during the battle than all the other defences combined. As Francis K Mason put it in his book on the type, "The RAF ... had to have the Hurricane". One key reason why the Hurricane was critical was that Hawker's were able to carry forward their well tried biplane technology and factories using the systems into an effective - albeit limited development potential - eight-gun monoplane fighter. Even with all the short cuts Hawker's used, production of sufficient Hurricanes was, in the words on another battle 'a damn close run thing'.

These two photographs of the prototype show both how it differed from production Hurricanes, and also a number of changes K5083 underwent in its own early career.

Notable changes are the re-arrangement and extra bars on the canopy after excessive flexing; the removal of the tailplane struts; the extension of the radiator bath as well as many other small items - as expected in a prototype's development.

Differences to production aircraft are also numerous, but one that always intrigued me is the change in the shape of the undercarriage door.