The Boxkite undergoes a tail-up taxi test, on the morning of 11 September 2013. [James Kightly]

It is intended that the aircraft will be the star of the official RAAF two-day anniversary airshow at RAAF Point Cook on 1st and 2nd March 2014, commemorating the centenary of the first ever flight of an Australian military aircraft, the original Bristol Boxkite CFS-3 by Lieutenant Eric Harrison on 1st March in 1914.

This replica of Australia’s first flying military aircraft was designed and built by the team of Group Captain Ron Gretton AM and Wing Commander Geoff Matthews (both RAAF retired) as ‘Project 2014’, for the RAAF Museum, over a period of six years, and powered by an Australian-made 110hp (82kw) Rotec R2800, seven cylinder engine. The aircraft has been donated to the Museum.

Many people and organisations supported the project, and we will be listing them shortly. We are updating the Project 2014 website; www.boxkite2014.org and there will be further information available soon. Ron, Geoff and I (assisting with publicity) can be contacted by e-mail at: info@boxkite2014.org 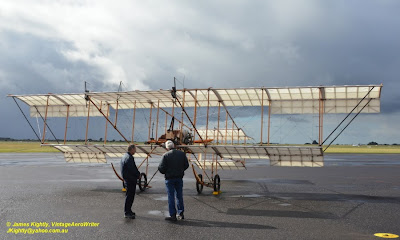 Job done. Ron Gretton (left) and Geoff Matthews take a look at the result of their labours. [James Kightly]
Posted by Vintage Aero Writer at 10:32 PM No comments: Links to this post