Texas has a long running anti-road litter campaign, known as Don't Mess With Texas. One of the adverts features the (then) Confederate Air Force's (CAF) B-17 Sentimental Journey. 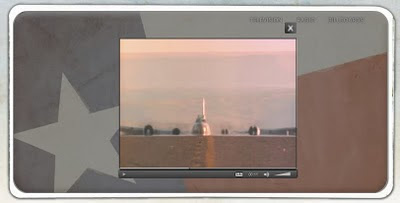 Unfortunately I can't embed the advert, but if you click on this link, you'll get probably the best Warbird advert ever. 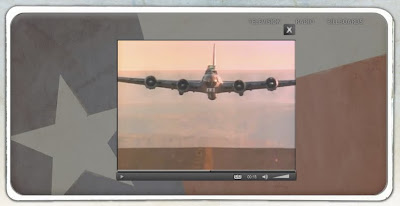 "Somebody up there's gonna be watchin'."

If you think about getting that all to line up in real time (hiding a flying B-17 in a valley isn't easy at the best of times!) it must have been a tricky advertisement to film as well. Originally, it was going to be bigger. CAF pilot Randy Wilson recalls on WIX here;

"I flew the FM-2 Wildcat during the filming of the Don't Mess With Texas commercial and Reg flew the P-51D Mustang "Gunfighter". We were asked to fly directly behind the B-17 as it came over the hill but with the B-17 down in the dirt we were eating its turbulance and never made it into the final cut, despite several attempts. Looking at my logbook, the video was shot on 24-25 October, 1990."

Currently they are taking votes for the best advert in the series, and as I write, the CAF one is at No.3. You have to keep clicking to hit your preferred choice, but you can vote here... You know which one to vote for.

Posted by Vintage Aero Writer at 9:22 AM No comments: Links to this post

The attached photo was supplied to me by Tom Gould, for publication in Flightpath. It shows a view of the Short C Class flying boat G-ADUT Centaurus in the late 1930s. It's part of a photo album from an unknown RAAF airman of the 1930s, and we are publishing it in the next issue of Flightpath - Vol.22 No.3. 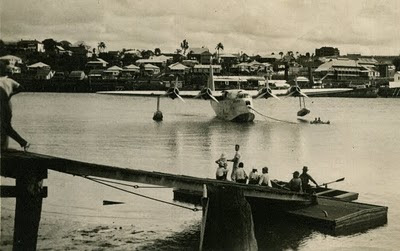 Even after sorting it and it's sister pictures out for publication, I've not been able to move on from this one recently, as the flying boat is actually moored on the Brisbane River at the Domain, in the City of Brisbane. As is currently well known, this river peaked at 4.46 metres (14.6 ft) in the January 2011 floods, as well as higher back in 1974, at 5.5 metres (18 ft), and in 1931, a few years before this photograph was taken.

It's not always looked this placid.
Posted by Vintage Aero Writer at 11:59 PM No comments: Links to this post

For the first post of 2011, let's delve into Flight's fun archives once more. You might've opened your Flight magazine to see this spread* of the RAF's latest fighters in 1938. That art deco streamline look, works well for the Hurricane, while the unfortunate Spitfire, as well as going rapidly downhill isn't looking nearly as fast. Amazing what an artist can do for your aircraft's performance. 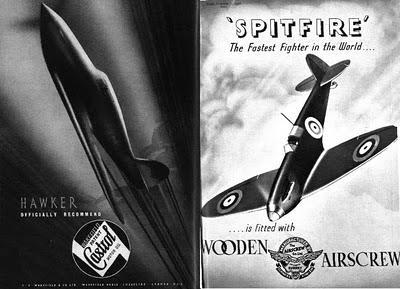 It's mildly ironic to see that both have the wooden fixed-pitched props that were discarded as quickly as possible to ensure the performance went up a critical notch, and the Spitfire's advertising for this ball-and chain of a prop it had, then, also mentions that it has a 'Schwartz Finish'. Wouldn't 'Black' be more British?

What make these two a bit more interesting I think is spotting the cheats from the real Hurricane design in the one illustration (for instance no ventral fin or fixed tailwheel - only K5083 was briefly like that) and the various items identifying our early production Spitfire.

Well, it passes the time, anyway.

*You wouldn't have really, as I made it up, combining two different issue's pages.
Posted by Vintage Aero Writer at 3:04 PM No comments: Links to this post