The Measure of the Man - Gary Austin 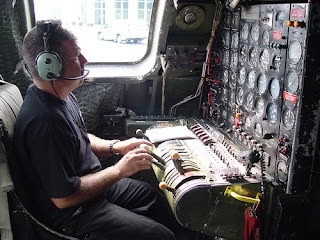 Gary Austin at the Flight Engineer's position on the CAF's B-29 'Fifi'. His good friend, Brad Pilgrim, has since taken these throttles on. 'cusrey'.

Yesterday was the second anniversary of the untimely death of Gary Austin. He was a remarkable man who became well known internationally in the warbird world via the WIX forum when he was working for the Commemorative Air Force (CAF) as an engineer. He was, of course, already well known to the many who'd come across him in the US in real life. But those two statements are the least of someone who was clearly a remarkable personality, an inspiration and a gentleman in his dealings on the web. As Taylor Stevenson said on WIX when recording Gary's demise we lost "a true artist in the Warbird Community".


Some details are available via this obituary:

Gary Austin, 39, of Midland passed away on October 26, 2009 at his home.
...Gary was a well-known, loved and respected war bird aircraft mechanic, pilot and humorous storyteller. He was always ready to be of service to anyone at any time sharing his loved and extensive knowledge and experience in promoting the safety, repair and preservation of all war birds. Gary's war bird career began with his work at Peeler Aviation DeWitt Spain Airport in Memphis, TN. He moved to Breckenridge, TX to work with Nelson Ezell doing war bird restorations at Ezell Aviation in Breckenridge, TX. For the past several years he has worked for the CAF as a aircraft mechanic and B29 FiFi Flight Engineer/Crew Chief with extensive restoration of the B24 Ol' 927 (Diamond Lil). He was known all over the world for his skills in aircraft maintenance and repair.

And Gary tells his own story on the EAA's Timeless Voices interview videos here, (obviously made before he passed away).

Gary was responsible for one of the most remarkable stories in warbird preservation, when he responded to a question on WIX "What's The Plan For Diamond Lil?" 'Lil' was the CAF's LB-30 / B-24A Liberator, which Gary was in the process of converting back from her freight-hauling configuration to something more appropriate to this rare and historic aircraft. This discussion became one of the longest running threads on WIX, and provided a remarkable insight (available in no other format I'm aware of) into the reality of warbird restoration and operation - and was communicated in a remarkably accessible, positive and friendly way.

The net result was that many were able to understand what went into a restoration, and as a direct result of Gary's approach, many were inspired to do everything from making small donations to changing their life's course to take on some of these kind of jobs. Somewhere in between was the inspiration for the donation of the new nose art (by Chad Hill, 'Django' and team) that took 'Diamond Lil' to becoming 'Ol 927' and took a lot of the aircraft's fans along with her in understanding the need and detail of this change; and the fact that this transport Liberator was equipped with a set of guns with funds raised by WIX and other friends. 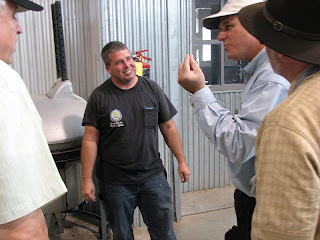 Gary in the middle - in action, in conversation. Walking and taking are as vital for warbird organisations as wrenching - and Gary did all three. via Ryan Short, from the 'Gary Austin in Pictures' thread here.

I could write all day about that, and the many other stories that Gary shared on WIX, (posting as 'Retro Aviation - watch out for the 'In Memoriam stickers around) and that went out into the wider warbird community and other, more formal publications, my own among them. But more important to note is that Gary's old time courtesy, good manners and positive attitude made up a remarkable personality that got Gary - among may other things regular credits as 'the best ambassador for the CAF' and, not incidentally, the warbird world.

Just as important is the image I have in mind of another piece of bent metal heading to the bin after some tinbashing went awry. One of the best things Gary shared was that even for the best of us, the plan doesn't always go by the recipe, and overcoming the mistakes and hiccups we all face is part of being an achiever, rather than just a talker.

Much has been written by others about Gary, and the closest account is by his long-term friend Brad Pilgrim - one of Brad's tributes is here. I never knew Gary, although I corresponded with him, and we shared a couple of online jokes on WIX. However, despite the length of time he has gone, we are still finding evidence of his works and inspiration are out there. Certainly he's not forgotten here.

The Writing Wrench
What hasn't been said about Gary often enough, I think, is that he was (as well as remarkable warbird mechanic and inspirational role model in that job) a remarkable writer. I get to sub-edit and work on a huge number of aviation articles and books, and it's axiomatic that those aircraft engineers with the best stories to tell are impossible to get those stories out of - and if you can, those stories are a nightmare to knock into shape.

But Gary was a complete exception to this. His posts on WIX were remarkably clean and polished, and like many other great artists, you don't notice the real skill was making the very hard look easy. His writing was remarkably clear, grammatically correct and well spelled, and his style, while deliberately not formal in most cases, managed to convey sometimes difficult or emotive concepts in a accessible way that treated his reader as a peer. Frankly, I'd be proud to communicate as well as Gary at times.

Sadly, thanks to Photobucket, we have lost most of Gary's images he used to illustrate his stories and posts, but I think that it is a remarkable measure of the man that so many of his stories stand well even without that apparently crucial element.

If you want to read some writing that in the warbird environment is, I think, the equal to that of those recognised as 'great writers' (whatever that may be) I commend grabbing a cup of tea, cocktail or preferred light brew, and sitting down to one of the following:

Rookie school in a Cassutt.

Not essays in the same mould, the massive 'Ol 927' thread is here. Not all Gary's own work by any means even a short read of a few pages gives and insight into his approach and the effect that has on the warbird environment. Gary's endless fund of stories were visual as well as verbal. Here's he's being chased by the Sea Fury, thankfully not 'lost' due to being in Jack Cook's collection. Gary Austin, via Jack Cook.

While Gary was the kind of guy who would 'give you the shirt off his back' tragically there was one person he ultimately short-changed; himself. He faced the terrible demon of depression, and in the end it got the better of him. His loss and the manner of it is part of his story (the tribute thread from two years ago is here) but what I hope will be better remembered is his huge contribution to the warbird world, and it is clear that for many, even now (as seen in this thread) his inspiration lives on. 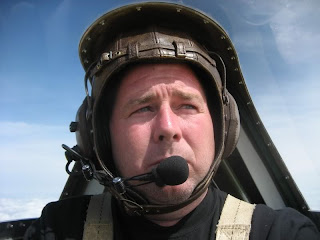 The heading is a reference to a comment by 'Locobuster' on WIX here "I have heard it said the measure of a man's greatness is best witnessed in the good influence he had on those around him". I certainly agree. His legacy is one that most of us would be proud to be within acres of. Attempting to write this tribute, something I've been trying to do for two years, shows just how hard it is to try and encompass such a remarkable life - it may be a poor effort I've made, but it is, I think worth the try.

Thanks too, to those who candidly shared their thoughts on Gary and kept and shared the pictures seen here and in the linked threads. 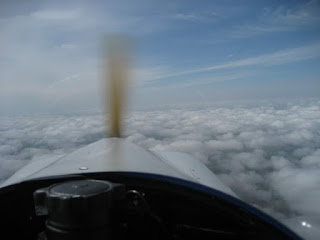 Thank you Gary, and blue skies.
Posted by Vintage Aero Writer at 10:27 PM 3 comments: Links to this post

You may have wondered what it is like to be an aviation journalist, and interview a well known or respected aircraft engineer or restorer.

This video, from Franklin Poole of the Fort Worth Vintage Flying Museum is exactly like the interview experience. He is outlining how they have come up with some rather significant improvements, using a rare but important 1940s invention, for the Wright-Cyclone R1820-97 on their B-17G.

Having viewed the video, all you need do is write up your understanding of this magnificent achievement in no more than 500 words and by next Tuesday, and be prepared for any corrections sent in by the well-informed readers. And the not well informed ones too.

Should you find the material difficult to summarise accurately, further research will lead you to this video, and this web-page.

Whatever else you note, remember that side fumbling must be effectively prevented.
Posted by Vintage Aero Writer at 6:56 PM No comments: Links to this post

A news item (in Russian) about the return to the air of one of W.W.II's most important aircraft, as well as the most produced - the Ilyushin Il-2:

Add another to the 'rare & unique fliers' list.
Posted by Vintage Aero Writer at 11:04 AM No comments: Links to this post

This is a selection of the main books that relate to the 1969 Battle of Britain film and related cinema and television depictions of the battle. 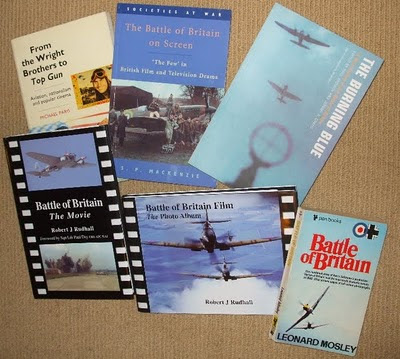 The contemporary 'making of':
Battle of Britain The combined story of Harry Saltzman's production 'Battle of Britain' and the supremely dramatic events of 1940. With 16 pages of full-colour photographs. Leonard Mosley. Pan Books. 330023578. 1969

The modern 'making of':
Battle of Britain The Movie. Robert J Rudhall. Ramrod Publications. 0951983296. 2000. (Note I understand there has been a subsequent edition with changes not made by the late Robert Rudhall, and some of these have added errors. However that is secondhand information.)

The books by my friend the late Robert Rudhall are particularly treasured; one being signed and dedicated to me, the other with a letter regarding the (very little) help and encouragement I gave Robert when he was writing the books.
Posted by Vintage Aero Writer at 10:06 PM 3 comments: Links to this post