The last Spitfire out of...

Sometimes you don't realise something's actually making history at the time.  The image below was taken of a Spitfire at an airshow; so far, so straightforward.  But the relatively nondescript location is an historic one; it's on the upper hillside of the former Croydon Airport, once, particularly in the 1930s, London and Britain's air gateway to the world. 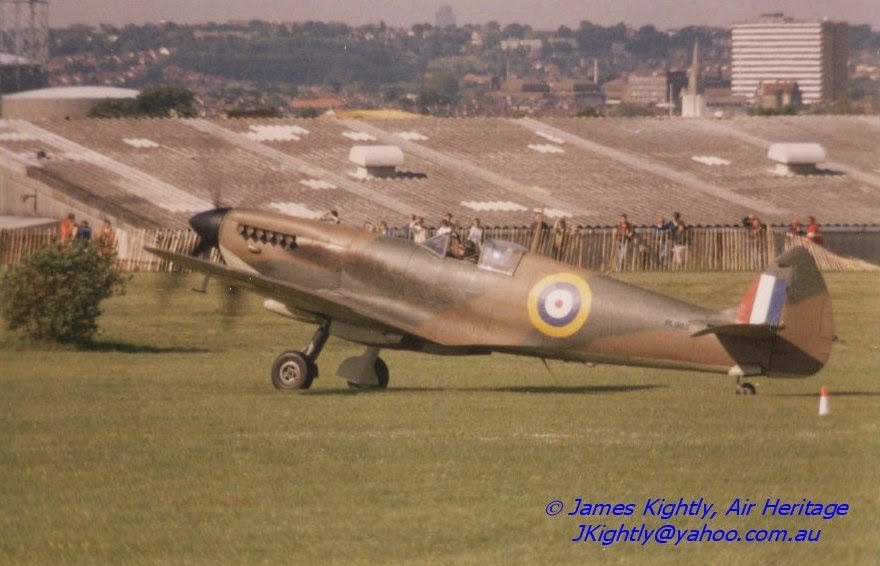 The Spitfire PL983, is a PR Mk.XI (appropriately registered G-PRXI) a photo reconnaissance version, seen here in the colours adopted for the excellent TV series 'Piece of Cake'. It's seen at the Croydon Anniversary Airshow in 1988, and proved to be the last Spitfire to fly from the Croydon Airport site. The reason for the airshow in 1988 was to mark, in Australian Bicentennial year, the 60th anniversary of the first solo flight to Australia by Bert Hinkler, and the airport's many other Australian connections. There had been a previous airshow in 1980, which I didn't get to, commemorating Amy Johnson's record flight which had also started from Croydon.

This area is now known as the Roundshaw Open Space, and the end of a taxiway and runway junction can be seen on Google Earth, which would be to the right of the Spitfire in the image. For orientation, the old control tower and terminal building are off to the right of the image, about a half-mile down the hill. I think there's a line of trees planted about where the Spitfire is in my pic, and the buildings behind it in the foreground are on what was the airfield up to the 1950s when it closed.
Posted by Vintage Aero Writer at 10:43 PM No comments: Links to this post

One of the great things about travelling is seeing stuff that's just not around in your own culture. Among others, the francophone world (and Italy) have a great tradition of what is known in French as 'bande dessinée', or BD, which roughly translates into 'drawn stories', but is usually mistranslated as comics or cartoons. Given the relatively lowly status of such things in most English culture ("they're for kids or geeks") a lot of people are missing out. Remember two of the twentieth centuries greatest heroes are Asterix and Tintin, from France and Belgium respectively. Italy hasn't had the same export success, but nevertheless... 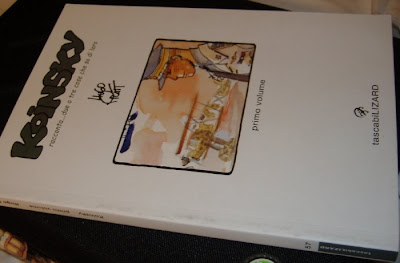 Italy has a strong culture of cartoon books, anchored in one corner with the weekly Topolino (Micky Mouse - lit. 'Small Mouse') cartoon books, I believe introduced to Italy in part with US culture in late World War Two, but which has grown to one of the biggest original non-English Disney markets. The booklets were everywhere when I was a kid in Italy in the 70s, and are everywhere even now. One other side of Italian cartoons is the use of strips to depict history and other 'educational' stories. I had a book covering Garibaldi's unification of Italy in cartoon format, which I wish I had now. There wasn't too much to catch while we were in Europe last year, but I did pick up this one, seen above and below. The draughtsmanship is a bit scrappy for my taste, but the story was original, covering a usually forgotten aspect of World War II in North East Africa, between the Italians on one side, and on the other the British and South Africans. From my point of view, it was of merit for the accurate and appropriate aircraft types shown: 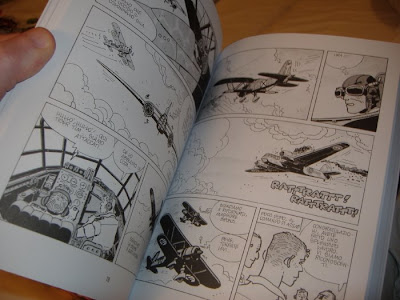 Hawker Hartbestees, Fiat CR-42 and Bristol Blenheims, the latter two types seen above. While we were in France last year, I tried to see if I could pick up any of the series featuring Biggles, produced in France. None of those were available, but there was other stuff, some found in a magnificent bookshop on a Parisen boulevard that gives me a warm feeling just remembering it. Top of the list which went into the backpack was this pair of stories, recounting the adventures of two heroes and their girl (very carefully and curvaceously drawn...) in the late 1930s and during World War Two. 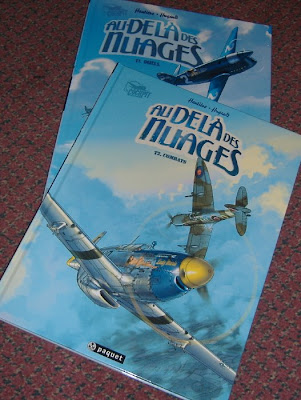 Known as Au-delà des nuages (Beyond the Clouds), the draughtsmanship is, I think, superb, and the array of unusual aircraft shown accurately depicted in credible (but fictional) scenes is something to show the second-rate plot development of the Hollywood Multiplex fodder up very badly. For those interested in more details, the artist, Romain Hugault, also has a blog. 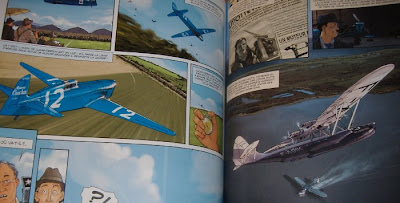 Beautiful 1930s racers and flying-boat airliners. One of them even had a Supermarine Walrus, depicted with a fictional, but credible nose art design. Given that the Walrus is one aircraft I have written a book about, I had to have it, didn't I? 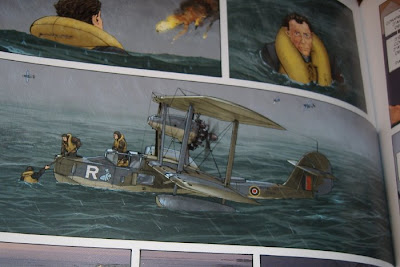 Posted by Vintage Aero Writer at 10:31 PM 4 comments: Links to this post