A special pre-Christmas present was this unexpected badge for the volunteer work. 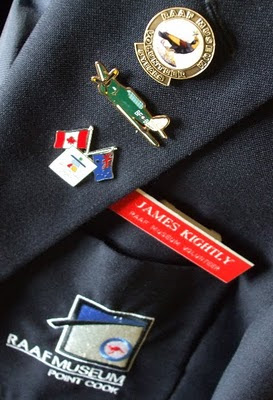 Just proves that time flies when you are having fun.
Posted by Vintage Aero Writer at 2:34 PM No comments:

Comedy often gets a dismissive wave off, but good bad comedy is a treasure, and often nails the icons and absurdities of the time.

This week we lost one of the great deadpan bumblers of film, immortal as Frank Drebbin, but also as the doc Rumack on one of aviation's scariest flights - Airplane! I'm sure everyone's got the Shirley reference, not to mention starting to list their other favourites, but the following just seemed appropriate, including the cultural references and, of course, the bad puns and bad taste.

Rumack: 'Well, I don't have anything to say, you've done the best you could. You really have, the best you could. You can't expect to win em all. But, I want to tell you something I've kept to myself through these years. I was in the war myself, medical corps. I was on late duty one night when they brought in a badly wounded pilot from one of the raids. He could barely talk. He looked at me and said, "The odds were against us up there, but we went in anyway, I'm glad the Captain made the right decision." The pilot's name was George Zip.'
Ted Striker: 'George Zip said that?'
Rumack: 'The last thing he said to me, "Doc," he said, "some time when the crew is up against it, and the breaks are beating the boys, tell them to get out there and give it all they got and win just one for the Zipper. I don't know where I'll be then, Doc," he said, "but I won't smell too good, that's for sure." '
Ted Striker: 'Excuse me doc, I got a plane to land.'

What's not so well known is that Nielsen trained as a gunner during W.W.II in the Royal Canadian Air Force, but the war was over before he was to be posted.

And I'm sure he's up there, and he won't mind one final warning:

"...this guy has no flying experience at all. He's a menace to himself and everything else in the air... yes, birds too."