Standing at the runway's end

The internet is filled with examples of people standing at the end of runways and / or facing low flying aircraft.  But these two are not like that.  In both cases the person standing there was authorised to do so, and for the films we are about to see.  They are similar, in a way, yet very different, too.  But they're both history.

Oh, WARNING. Adult themes (technically) and language.  If you haven't already jumped ahead.

First we have a circa 1972 Southwest Airlines advert about how someone (in hotpants) up there "loves you".  Nice to know.

Look at that - smoke!

Secondly is a very, very famous piece of film of Alain de Cadenet doing his piece to camera at the end of Duxford's grass runway while the late, great Ray Hanna brings Spitfire MH434 to finish off the intro, as he does, somewhat more impressively than Alain was ready for.

The film has been withdrawn by the copyright holder, but they have, instead, shared a better version of it, here.

Ray 'the master' was probably the most safely comfortable warbird pilot at 'dot feet', and a great display pilot.  I know one of my life's privileges was to watch someone that good at work doing what he did, though I wasn't there on Alain's immortal day.

PS - Please don't send me other examples of such activities on the interweb.  I'm mildly interested in authorised comparisons, not at all in risk-taking ones.
Posted by Vintage Aero Writer at 10:06 PM 2 comments: Links to this post

Was it really a year ago?


A 19 second (poor quality by me iPhone) video from the turret of the Canadian Warplane Heritage Lancaster of the Cavanaugh Flight Museum Mustang and the Commemorative Air Force B-29 Superfortress 'Fifi', just before the Hamilton Air Show 2012.  Unlike me, be there this weekend! Wall-to-wall RR Merlins are on offer.
Posted by Vintage Aero Writer at 10:50 PM 1 comment: Links to this post

In October 2003 I wrote an article on the retirement phase of the recently grounded Concorde airliners for (the then) 24 Hour Museum website in the UK (now Culture 24).  The article is still available on their website here but on this blog I've interleaved current 2013 details to update the story. 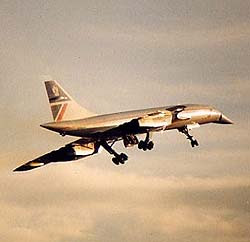 Photo: the sun is setting on an incredible aviation adventure. © James Kightly.

UK museums hoping to acquire and display Concorde supersonic airliners when British Airways (BA) finally retires them could end up being disappointed.

BA declared in spring 2003 that it would retire the aircraft to museums and all the major British aviation museums entered a race to be chosen to host an aircraft. So far, most appear to have heard nothing from BA.

Now aviation industry insiders have traced flight plans filed by BA for the last week of operations by the supersonic airliner. The plans reveal a bizarre picture of which museums are likely to end up hosting the machines.

The most controversial rumoured destination is Barbados, an island with no substantial aviation history and (some might say) a tenuous Concorde connection. The island is said to have been gifted a machine on the basis that a museum will be built to house it. 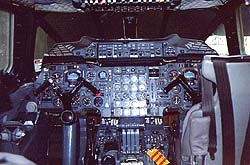 Photo: BA is still in the pilot's seat when it comes to decisions about housing Concorde. © James Kightly.

"Concorde is an icon for the world," said a BA spokesperson to the 24 Hour Museum on October 17. Rumours continue to emerge about the likely final destinations of the plane, but BA are adamant they won't comment about what they regard as speculation.

The spokesperson refused to comment about the speculation that venues in Barbados and New York have been pencilled in as last resting places for the supersonic transport.

No date has yet been set for any official comment or announcement about the aircraft's retirement homes. BA say there is still a lot of detailed discussion and consultation to be carried out before anything can be announced publically.

"We want to be sure that the arrangements are in place for Concorde to be seen by as many people as possible, in an appropriate setting, for many years to come." 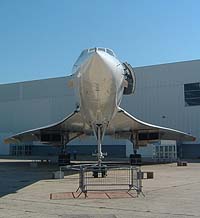 Aviation experts and museum curators are nonplussed at the rumoured choice of Grantly Adams Airport, Barbados. The local environment is not likely to be kind to Concorde – the salty sea air would incredibly effective at reducing an aircraft made from extremely exotic alloys to a corroded hulk.

A local (but un-named) businessman has apparently offered to finance the building of a facility to house the aircraft. Will G-BOAG, the aircraft said to be headed to the West Indies, become an off-white elephant before being scrapped as a safety risk? [G-BOAE went to Grantley Adams Airport Barbados, and is now preserved inside in the Barbados Concorde Experience, an excellent result.]

New York has been Concorde’s most important destination. British Airways have apparently decided this merits a donated example. The Intrepid Air and Space Museum, a moored aircraft carrier, might seem a sensible choice at first.

However, Concorde G-BOAD is apparently intended to be placed on a barge next to the carrier. Exposure to a saline marine environment could damage this aircraft quickly unless it is covered.
Given that there are already a significant number of aircraft on Intrepid’s deck which are decaying and there are worries about the funding of this museum, the omens are not good. [And to some degree those issues have come to pass, with damage when stored ashore and several moves to and from the waterfront for G-BOAD.  The aircraft's long-term future in this environment is simply not good.] 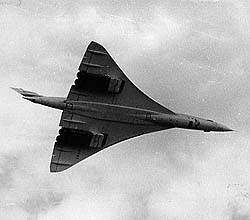 Photo: at the Farnborough airshow in the 1970s Concorde was just starting out on a controversial career. © Ross Kightly.

Exemplary museums which could be considered by BA include:

The Imperial War Museum at Duxford (another holder of a pre-production Concorde, and a world-class aviation museum with a diverse airliner collection)

The Aerospace Museum Cosford, the UK’s most comprehensive airliner collection

A BA spokesman early this year claimed that that museums with “…the strongest local connections and ones that that will be able to afford the best public access” would be favoured.

Actually, runway length seems to be more important. Too-short runways seem to be BA’s reason for dropping the museums above. However, a Concorde did fly into Duxford. And East Fortune landed an Avro Vulcan and de Havilland Comet, after a mini-roundabout and some fences were temporarily removed from the now-disused runway!

[East Fortune got Concorde G-BOAA after an epic sea and land journey to the museum.  Though Scotland having a well-presented Concorde is a good thing, the development and infrastructure put on ice and derailed much of the museum's other restoration and preservation work for some years.] 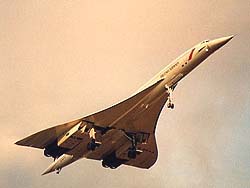 Photo: climb-out or end of the road? BA's retirement plans seem incomprehensible to some. © James Kightly.

Julian Temple, Curator of the Brooklands Aviation Museum in Surrey, is still hopeful that they will get a Concorde. [Brooklands got development aircraft G-BBDG.] There remain three grounded aircraft to be offered new homes. [G-BOAB remains today on external display at Heathrow.]

One of these three, robbed to keep the others flying, is hardly recognisable - having lost its wheels, nose and tail. Spare parts for Concorde are not plentiful, and though it could be recreated using Air France spare parts, the Christie’s auction guide holds little hope for a cash-strapped museum. With essentials like pilot’s seats priced at £3,000 each, the total cost could be too steep.

A strange UK choice from BA which seems to be emerging is Manchester Airport’s viewing park.
Ambitious plans are being built around the last ever airliner made in Britain, the BAE Systems RJX100, which is already on site. BA have apparently decided that Concorde G-BOAC should join it.

However, airports are not good places to preserve aircraft, being space-hungry high security environments. Manchester’s excellent aviation collection is actually several miles away in the centre of the city. [G-BOAC is now preserved at Manchester in a special glass hangar.] 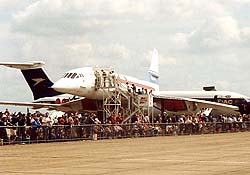 Photo: the IWM, Duxford, has a pre-production Concorde, not an airliner version. It does not seem likely to get a British Airways example. © James Kightly.

The Museum of Flight in Seattle is rumoured to be recipient for Concorde G-BOAE. A first-class museum, it can be argued that it is good to show Anglo-French innovation in a Boeing-dominated collection. [They actually got G-BOAG.]

However, with the current supposed plan allocating no less than three of the small fleet to the USA it seems a very odd choice. It should be remembered that it was US opposition, led by Senator MacNamara, that massively curtailed Concorde operations.

The one bright spot in this strange saga is the possible allocation to Filton, Bristol, of G-BOAF, the last Concorde built. G-BOAF was built in Bristol. [Filton got G-BOAF.]

Currently the Bristol Aviation Collection is based at Kemble, but the arrival of this machine may well kick-start the renaissance of a museum on a particularly historic site in 2004.