Not the British PM's finest hour

After a lengthy discussion on the Key forum regarding the necessity (or otherwise) that the Battle of Britain should be part of Britain's history curriculum in school, it appears that Britain's new Prime Minister may need to attend remedial history lessons himself, to correct his poor understanding of his predecessor's 'finest hour' - given a gaffe made when in the USA.

When discussing the US-British relationship, it appears David Cameron, while acknowledging the junior role of the UK in relation to the US today said: “we were the junior partner in 1940 when we were fighting the Nazis”.

I trust this blog's readers won't need to be told (as Cameron soon was informed, and acknowledged) that America was very much neutral throughout 1940, and profiting from Britain's isolation by making military sales (the Battle pre-dating Lend-Lease) and the US only entering the war after the attack by Japan a year and a half later.

So much for 'Standing alone'* then and a 'finest hour'.

It's too easy to go on, but apart from getting one of Britain's most important global historical moments wrong, does it show the reality of the British Prime Minister's grasp of history?

What makes the gaffe doubly surprising is that Winston Churchill is one of Cameron's heroes.

But after Cameron's original remark on Sky News, it was shown that wasn't just a slip of the tongue. In a prior recorded interview on America's ABC, Cameron said: "We were the junior partner in 1940 when we were fighting against Hitler; we are the junior partner now. I think you shouldn't pretend to be something you're not."

What was also interesting was the British press' (somewhat predictable) reaction. The Daily Mail fulminated, the Financial Times was measured and ponderous, and the Guardian simply didn't regard it as important at all, while lumping anyone who thought it worth getting right with 'incandescent of Daily-Mail-land'.


David Cameron faced a furious backlash yesterday for the astonishing claim that the UK was a 'junior partner' to America in 1940 - a year before the U.S. even entered the war.

The Prime Minister was accused of forgetting the sacrifices made in 1940 by those who fought in the Battle of Britain, the heroes of Dunkirk and the Londoners bombed out of their homes in the Blitz.

Downing Street hastily claimed that Mr Cameron had meant to refer to the 1940s in general. But by then the damage was done.

General Sir Patrick Cordingley, former commander of the Desert Rats, said: 'I am quite sure if Winston Churchill were alive today he would be dismayed.'


In Washington the previous week Mr Cameron did what he could to defuse American anger over BP and the Lockerbie bomber, and to strike a note of humility. But he over-egged it when he said that the UK was the junior partner in the Anglo-American relationship, just as “we were the junior partner in 1940 when we were fighting the Nazis”. As conservative commentators have reminded him to his cost, while the Battle of Britain raged the US was conspicuously and profitably neutral.


The Cameron bluntness was given a high-profile outing the week before in the US, though the victims that time were patriotic readers of the Daily Mail. In an attempt to recalibrate Anglo-American relations to a more realistic level, the prime minister said Britain should accept it is the "junior partner".

To illustrate his point, Cameron said that this was even the case at the height of the "special relationship" in 1940 when Britain and the US stood shoulder to shoulder to meet the Nazi threat. He later admitted his remarks showed a shaky grasp of history because in 1940 Winston Churchill was embarking on his year-long campaign to persuade Washington to join the allied war effort.

History? It's just one misremembered thing after another. Or was that before another?

* Britain famously 'stood alone' but no-one would overlook the help given by the Empire and many other nations, as well a handful of volunteer American airmen.

[Note: The post is not a party political comment or particularly to do with current British affairs, politics or personalties, but simply a comment on a remarkable misunderstanding of a significant moment in history by the same nation's current leader. This post therefore does not reflect the author's political views, or the views of any associated publications.]
Posted by Vintage Aero Writer at 9:44 PM No comments: Links to this post

It's the 4th July, lots of happy Americans. 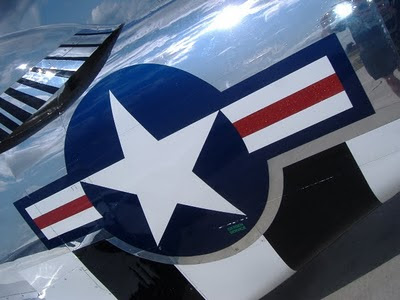 Only in America!
North American P-51D Mustang 'Quicksilver' N51HY at Oshkosh 2009. If you are going for a non-original scheme, go for it. This machine is not just eye-catching but blindingly shiny, with specular reflective paint in the red of the bar of the star & bar. Owners Bill Yoak and son and pilot Scott Yoak take a great deal of trouble to share their aircraft, letting people up close, touch - and from eight to eighty - have a sit in the cockpit.
Posted by Vintage Aero Writer at 4:51 PM No comments: Links to this post 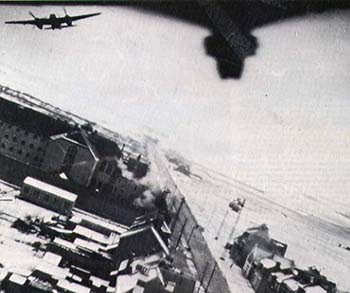 February 18, 1944, at 12 noon, two Mosquitoes after dropping their bombs on the prison walls at low altitude. Image: RAF.

I'd occasionally speculated as to why a film about the Amiens prison raid hasn't been made (details here, here and here) and particularly triggered recently by Sir Peter Jackson's decision to remake the Dam Busters movie, another unnecessary fly-over of well bombed dams in my opinion. Even more ironic is that as Jackson is a New Zealander, one might think he'd be interested in Operation Jericho as it featured several New Zealand airmen in an RNZAF Squadron, deserving of at least one feature film.

But there were films of the raid. A treasure is the film of the actual raid shot at the time, a not inconsiderable achievement, and unlike any commercial film a primary if partial source of the event. An extract of the film is on the Pathe newsreel website here and the image above is I think a still from that film. 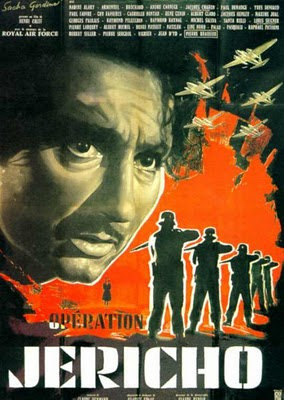 Secondly there was a post-war French film (details here and here) but one that focuses more on the details of the prisoners than on the technical achievement of the operation. It also looks rather like what you'd get with a modern Hollywood director got hold of it, starting with the overwrought poster from here seen above, or as the French site says: "Au moment de l'exécution, la Royal Air Force bombarde la prison." Zut Alors.

Dave Homewood, a fellow writer and researcher, but from New Zealand found (on a now defunct website) the following description:

Once the French film industry was able to make WWII epics, it did so with a vengeance. Jericho is the true story of the bombing of the Nazi-held prison at Amiens. It is argued that, while the RAF took an enormous public-relations risk in the bombing, the end result was largely salutary, resulting in freedom for 50 French hostages. The dramatic portions of the film share space with newsreel footage of the actual attack. One of the better films of its kind, Jericho failed to make a dent in the U.S. market, which at the time was inundated with war pictures.

The sole reader review on IMDb contains the following:

1944: A train full of petrol has stopped in the station of Amiens. The German army, still occupying France, fears sabotage. So they decide to take 50 hostages: if the resistant fighters attack the train,they will be shot.

Brilliant scenes: The sleepy town where people hide,afraid of the boots marching in the streets.

The city council,who has got to choose the hostages. "We've got to put our names at the top of the list" says the mayor. But two members are frightened and they resign their mandate.

The scenes in the jail, where a man (Pierre Brasseur) is so afraid of dying he'd do anything to save his life, even boot-licking: "I know where the commies and the Jews are" he shouts at the soldiers.

But it's the long sequence in the church were the hostages are imprisoned which climaxes the film. Calef avoids the usual cliché that all French people were brave resistance fighters; among these 50 people, some of them rebel, they are afraid to die,they cannot stand that dawn which is inexorably approaching. In the priest' s pulpit, Morin (Brasseur) has gone completely mad, his terror knowing no bounds. His attitude is in direct contrast to that of Simone who bravely enters the jail between two soldiers. She too is to be shot with the fifty men.
(Minor edits for grammar & punctuation.)

Back in 1945 the RAF could provide a Squadron's worth of Mosquitoes. As Colin Ford recalls:

Mosquitoes of No.487 (RNZAF) Squadron during September 1945 were flying during filming of a documentary movie titled "Jericho", a recreation of the Amiens Prison raid. After being renumbered No.268 Squadron in October 1945 they continued that flying activity sporadically until mid November 1945 when the big flying scenes were filmed which included a full Squadron formation and flights making dummy attacks over the Amiens Prison accompanied by a photographic Mosquito from No.69 Squadron. A number of the pilots and navigators who had to fly their Mosquitoes up to Paris for certain parts of the filming took advantage of the visits for some R&R. One of the scenes the Squadron filmed using the aircrew at the time was the full Squadron raid briefing.

The film might be of interest for the flying, but the somewhat over-dramatic description doesn't really appeal otherwise.

We should have an airworthy Mosquito in 2011, while there have been none flying since the tragic demise of the British aerospace T.3 RR299. In the meantime, lacking the real thing, for a rather well put together film of completely CGI Mosquitoes, see the famous short demonstration by Tochy called Merlins, here.
Posted by Vintage Aero Writer at 7:14 PM 1 comment: Links to this post

July 1, 2010. Canada Day. Recently, another Lysander returned to the skies, taking the world's population back up to three fliers, two in Canada. 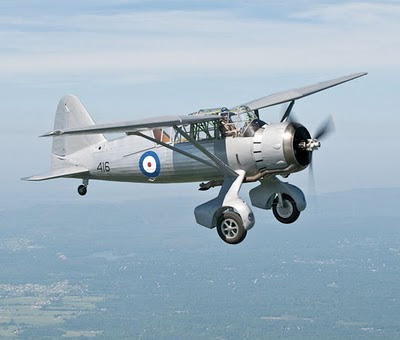 This is Vintage Wings of Canada's (VWoC) aircraft, which is now painted as '416' the first ever 'Can Car' built Lysander. The story of the VWoC Lizzie is on their website, here. 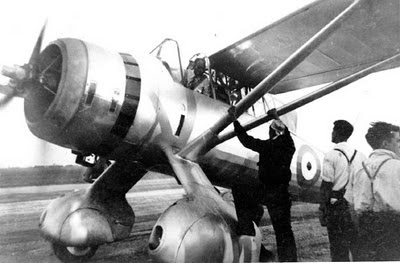 From my Lysander book:

"In April of 1938, a contract for 28 (later raised to 75) Lysander Mk.I was placed with the National Steel Car Corporation of Hamilton, Ontario, with Mercury and Perseus engines to be supplied from Britain. ... The machines were essentially the same as the Westland-built machines, although the National Steel Car Corporation were able to make larger panels with their presses (including the wing leading edge sections) and the undercarriage ‘U’ beam was of a composite construction, as Canada did not have the facility to heat treat such a large item at that time

"The first Canadian example was No.416 and it joined the RCAF on September 7th 1939. Its first flight, to the great and justifiable pride of the workforce, as it was the first aircraft that they had produced, was on 16th August, in the hands of E L Capreol."

Posted by Vintage Aero Writer at 11:32 PM No comments: Links to this post