Awaiting the sound of the Bell

One of the several airworthy restorations I'm very keen to see completed, the Planes of Fame Bell P-59 Airacomet, seen here at the 2011 airshow with a sectioned engine alongside, and the Grumman F3F behind. It will be a remarkable and significant flyer when it gets there.
Posted by Vintage Aero Writer at 10:26 PM No comments:

This pic and text came in from 'Old Fokker' and it was too good not to share. 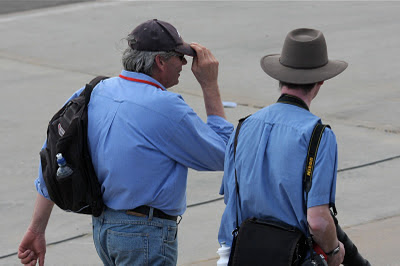 Something for the CV (or straight to the pool room !)
The notam tolls the knell of airshow day,
The Lowy herd towed slowly o'er the lea,
The media men homeward plod their weary way,
And leave the hangar to darkness and to me.

(with apologies to Thomas Gray)

Stewart Wilson on the left, yours truly right.
Posted by Vintage Aero Writer at 12:41 PM No comments: 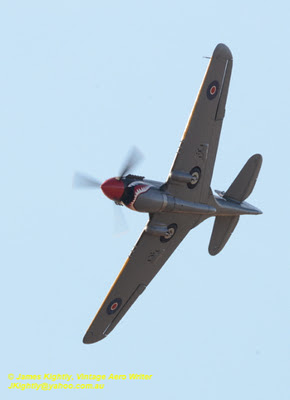 During Alan Arthur's practice display at Temora on the Friday for the Warbirds Down Under airshow this last weekend, I noticed due to him being up sun in the evening, how much you can see through all the control edges of the P-40. Note the unusual show-through in the Frise ailerons above 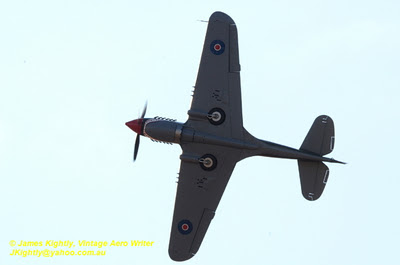 An almost plan view (above) and a fair amount of control input in the roll (below). 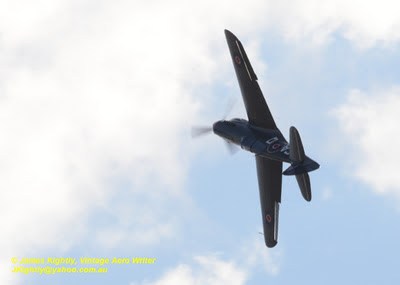 It was a nice display to see in a quiet evening, as the sun was well over the yardarm.
Posted by Vintage Aero Writer at 12:23 PM No comments:

The View from Space

I found this article, discussing 'How the Airplane got its Shape', interesting by virtue of the fact that it comes at the topic from an unusual angle - the view of a space historian; and that it touches on some of the less acknowledged drives of this arena of design. 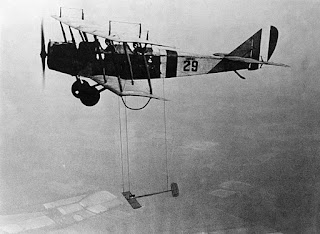 From the featured article, a NACA Curtiss JN-4 “Jenny” biplane with a model wing suspended beneath it. 1921. [NASA?]

People in aviation would have you believe that aviation is all about form from function, but it is far from so, most obviously from an examination of the more baroque aspects of aircraft design as exposed by the passing of time. There's an article about that, too, to be written.
Posted by Vintage Aero Writer at 12:21 PM No comments: 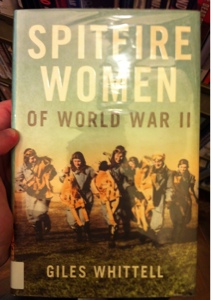 While looking up other books at the State Library (SLV) I found this book and was amused to note that the overly specific title was contradicted by the back cover, where these Air Transport Auxiliary (ATA) women are photographed next to a late mark Hawker Hurricane - one of the many other types they flew. 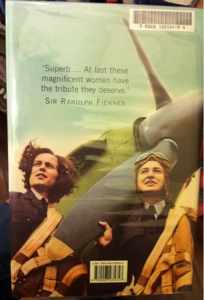 Another example of 'Spitfire Snobbery'
Posted by Vintage Aero Writer at 3:40 PM 2 comments: