My good friend Brett mentioned in his RAAF birthday blog post here on Airminded that on the formation of the RAAF in 1921:

"Interestingly, among the usual propeller makers, cooks, machinists and so on, the RAAF declared that it had need of airship riggers and balloon basket makers. As far as I know, the RAAF never operated any airships (or balloons), but I would guess the idea would have been to use them for maritime reconnaissance and anti-submarine warfare." 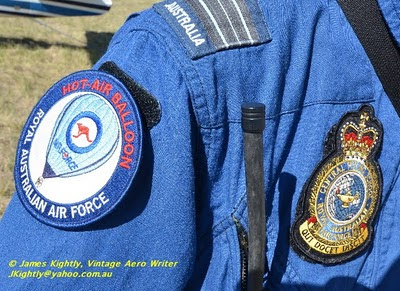 Certainly the RAAF never operated airships or balloons for warlike purposes back in the inter-war period, but while at the Antiquers airshow and fly in at Echuca last weekend, I bumped into a current RAAF balloon airman - who is one of the crew operating the RAAF's balloons. Details of the balloons, and their (recent) history is here. Serendipity!

As to the 1921 recruits, I'm sure anyone actually taken on for balloon work would have just found out that the old military axiom - 'If you can't take the joke you shouldn't have joined' certainly applied. However while hot air balloon canopies and power has certainly changed in materials since 1921 (if not principle) baskets are still woven from natural materials. So the (very old) basket maker would have a job.
Posted by Vintage Aero Writer at 1:02 PM 3 comments: Links to this post