One of the great things about the internet is the access to film that would otherwise never get seen by anyone but researchers, if that. Some is interesting for illustrating an amazing event - even if the film itself isn't anything to write home about (we'll see an example of that here soon). Others are just interesting because they put you 'there' and in a period that's gone irretrievably.

The following film is a piece of W.W.II Soviet propaganda, and as partisan as you'd expect. However it's a colour film of a remarkable array of captured German materiel, and starts with slow passes over a now fascinating collection of Luftwaffe aircraft. (This includes a Focke Wulf Fw 189 'Uhu', Fw 200 Condor, Henschel Hs 129, Heinkel He 111, Junkers Ju 88, Dornier Do 217, and numerous Messerschmitt Me 109s, and Focke Wulf Fw 190s.). It then goes onto tanks, guns and some marine gear as well.


A translation of the introductory notes reads:

On June 22, 1943, exactly two years after the beginning of war*, an exhibition of captured armament, seized by the Red Army, was opened in Gorky Park, Moscow.

Obviously this was on show for triumphalist reasons - not unlike the Roman triumphs from their era (and this film serves a similar purpose for the technically interested historian as Trajan's column does).

The fascination for some today lies with the detail of the schemes and technology of some of this equipment. Of the aircraft types listed, only a couple survive into double figures, most in ones and twos and a couple are 'extinct' for all practical purposes. While most of the national markings are recreations by Russians over their red stars applied after capture, the other details - as well as in the correct context, the capture markings - potentially provide valuable data.

*The date of Operation Barbarossa, the German invasion of Russia, and the start of what the Russians called The Great Patriotic War.
Posted by Vintage Aero Writer at 6:39 PM No comments: Links to this post

On the blog of respected French author Jacques Moulin, he has posted a set of photographs of an extempore armament modification to a Hawker Hurricane, apparently in Egypt. 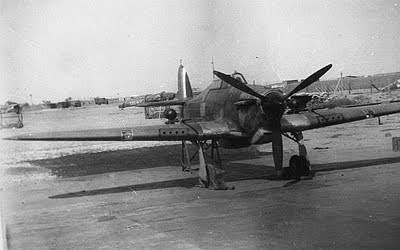 This mod is new to me, and we can assume it was not successful. While it is obviously undesirably draggy the detail work, particularly the teardrop fairing for the ammunition drums and the aft pillar mount is well developed. 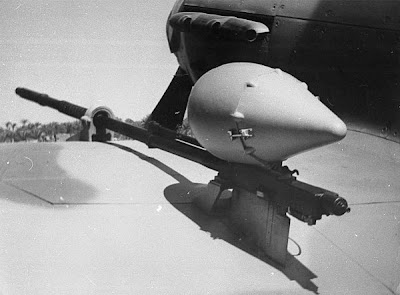 The gun is the Hispano-Suiza HS.404, usually known as the Hispano 20mm, and widely used from about 1940 on British (and other nations') aircraft. The Hurricane went on to get a set of four of these cannon replacing the eight machine guns in the 'c' version of the Mk.II, probably one reason this version didn't prosper. What's not clear is if the eight guns on this machine were retained - the open wing ports imply that they were. 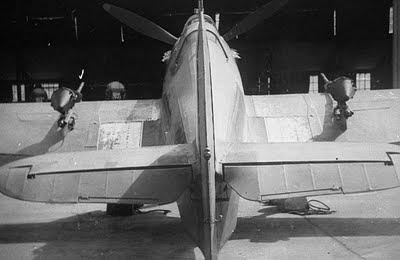 I can't help but wonder if the cannon mounts and set-up are actually a set of the made but rarely used Westland Lysander cannons. We had an interesting discussion of these here on the Key forum and the image shows how they were attached to the Lysander - and the mount similarity, although obviously rotated into a different position. Note the extra bracing on the cannon. 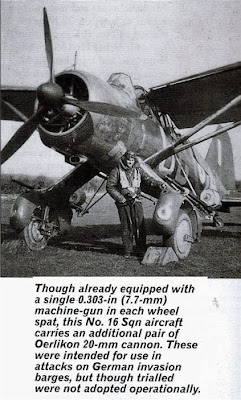 The early Hispano cannon had major problems with the drum feed when it was either moved from the dorsal position as seen here, or under high-g manoeuvring, as found on the first cannon-armed Spitfires in 1940.

(Hurricane photos via Jacques Moulin, credited 'RAF'. Thanks to Jacques for sharing these photos, as originally posted here.)
Posted by Vintage Aero Writer at 5:55 PM 2 comments: Links to this post

And the view from... 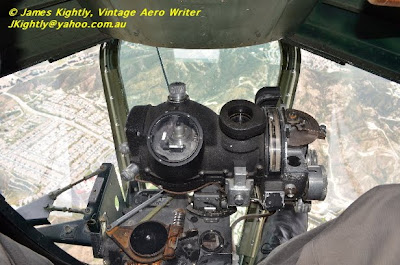 ...the bombardier's post of a flying B-24. An educational experience.