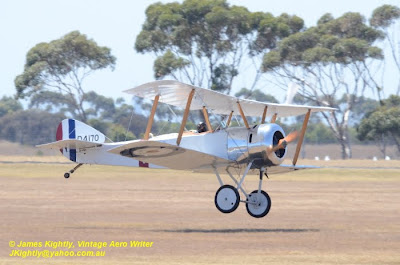 At today's example of the RAAF Museum's thrice-weekly 'Interactives' I grabbed a couple of shots of the Museum's Sopwith Pup replica, and noticed a phenomenon I'd not observed before. 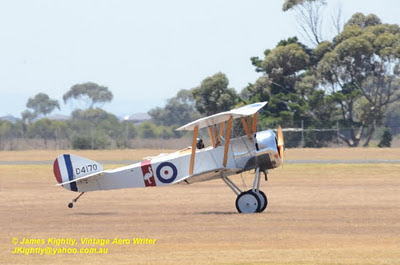 It was a warmish 33 degrees C, with very light winds (7kmh, according to the local weather station), and I think as a result of these conditions, the Pup became distorted in some odd details: close observation of the wheels in all of these photos and the fuselage roundels in the images above and below show that they're no longer the circles they are in reality, but look 'retouched'. 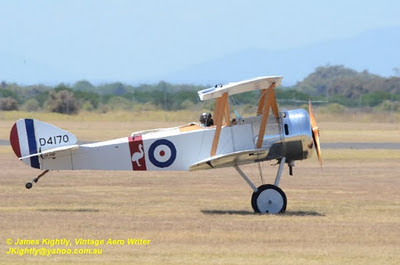 Strange! (I should add, for those that care about such things, that all three images are full frame and unretouched except for resizing and the copyright note. The lens was at 500mm.)

Nevertheless, it was a good day to see such are a rare machine in action, and the audience clearly enjoyed it.
Posted by Vintage Aero Writer at 9:45 PM 1 comment: Links to this post

It's been a while, and it's been pretty intense with a number of visits to interesting aircraft collections and talking to many and varied people involved in the vintage aviation scene. 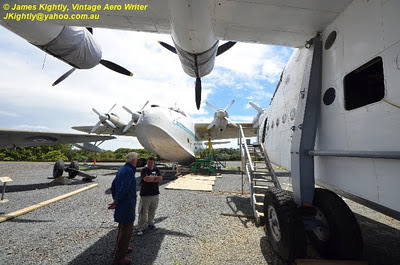 One particularly special moment was a long chat (thanks to Jonathan Pote) with Mac Bettjeman (left) on the Museum of Transport and Technology's Short Sunderland Mk.V (right). Mac flew as a 'Second Dickey' in 1944-5 in Sunderlands with 490 Squadron RAF off West Africa, a tough theatre of war, particularly for health risks, and he is now one of the MoTaT volunteers working on conserving the Sunderland before it goes inside in due course. That's the collection's Sandringham behind, a remarkable pair of Shorts in anyone's book. I was travelling with my New Zealand colleague Dave Homewood (centre!) around the aeronautic sites of the Auckland, New Zealand area, and we covered a lot of ground as well as a lot of rare aircraft.

But now I'm back at the desk. Let's see what gets put out from the gathering in.
Posted by Vintage Aero Writer at 10:33 PM 1 comment: Links to this post