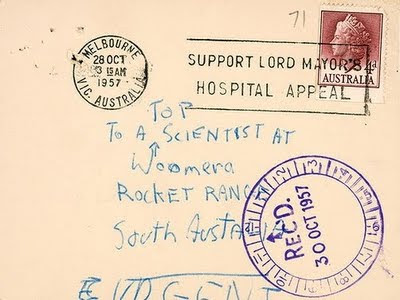 Space is not normally an area I propose to cover, but this item in today's Age newspaper is worth a note. 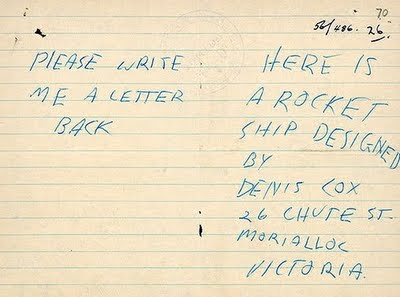 At the height of the Cold War when paranoia about Russia's space program was ramping up, a 12-year-old Denis Cox fired off an "urgent" letter to "a top scientist" at the Woomera Rocket Range containing his designs for a world-beating rocket. Now, 52 years later, Cox will finally get a response.

A fellow space aficionado and blogger, Bob Meade, tracked him down after the letter was dredged up by the National Archives of Australia and published on its website as the "Find of the Month" in May.

The publicity caught the eye of David Kilmartin, editor of the Defence Science and Technology Organisation's Connections magazine. Kilmartin has helped arrange a ceremony in Melbourne next month at which Cox will be presented with a framed response from a scientist in the DSTO's hypersonics section. 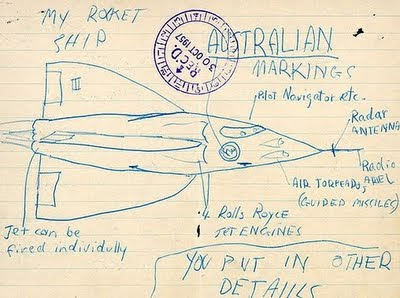 If only I'd sent off my skool sketches, maybe I'd be getting a response in ~uh~ about twenty more years.

More interesting is the way the connections were made, through blog, newspaper and archive.

James
Posted by Vintage Aero Writer at 7:01 PM No comments: Links to this post

This is my late eighties photo of the restored Comet Racer G-ACSS, 'Grosvenor House'. 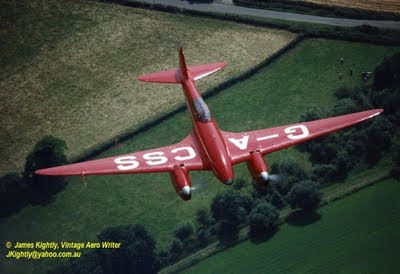 It is on a flight from Boscombe Down, home of the last airworthy de Havilland DH-106 Comet jet airliner (appropriately named Canopus) to Hatfield, the home of de Havilland. This flight was the only occasion the Comet airliner and Comet racer flew together - and, given that Canopus is now grounded, it is unlikely that it could happen again. Incidentally G-ACSS, in the hands of the Shuttleworth Trust at Old Warden, is also currently grounded but should fly again in the future. 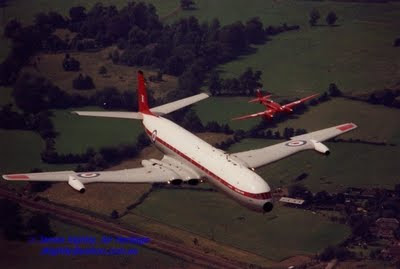 The Comet Racer was, of course, the winner of the 1934 MacRobertson Air Race from Mildenhall, Suffolk to Flemington Race Course, Melbourne, Australia. It was, arguably, the greatest air race (it's often known as The Great Air Race) and in historical terms there has never been another race that has occurred at such an important time of radical technical change.

Much has been and will be written about the Comet racer. Suffice it to say here was that in late 1934 it was the fastest thing to travel halfway around the world. It was a privilege to have seen such an historic aircraft on such a unique occasion as this.
Posted by Vintage Aero Writer at 6:49 PM 2 comments: Links to this post

Mildenhall to Melbourne 75 years ago

What is often held to be the greatest air race in history started now, at the other side of the world, 75 years ago.

It was an incredible achievement. Thanks to the Flight archive and Time magazine's 1934 report, here are some photographs and extracts showcasing the key aircraft and some of the frantic activity before the start. 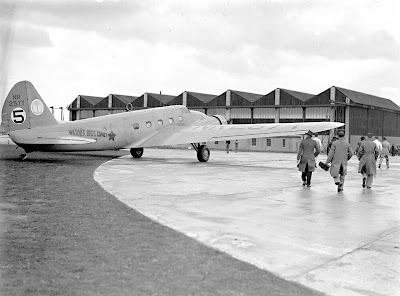 The team of Roscoe Turner, Clyde Edward Pangborn (right and left in the light colour coats) and Reeder Nichols in their 'Warner Brothers Comet' Boeing 247 arrive and dismount. 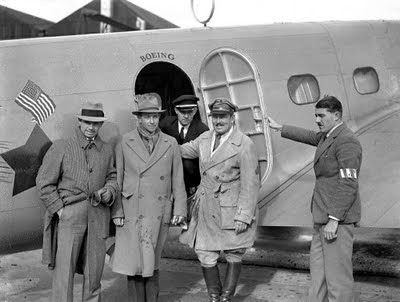 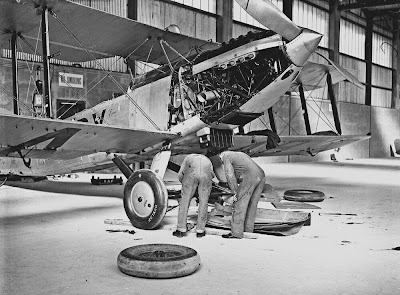 Month on long month of intensive preparations by the aviation industry throughout the world had preceded the race's start last week. Represented by each entry were countless technicalities, endless research, details, delays, many a heartbreak.
Time 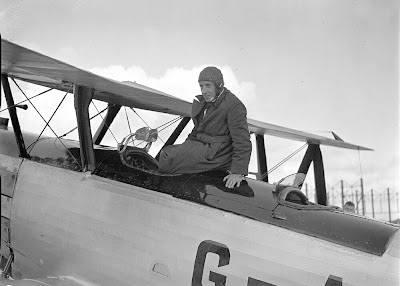 'Battling' Ray Parer, who had flown the 1919 race from the UK to Australia, but was the last finisher then. 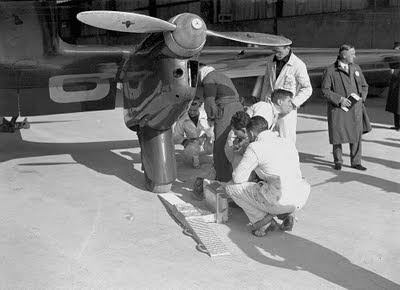 The aircraft had to be weighed. Here is one of the dedicated racing Comets built for national pride and at a bargain price by patriotic de Havilland.

The great doors of the Royal Air Force hangars opened wide at 3 a.m. One sleek machine after another was wheeled out. The deep-throated roar of their engines being tuned up fairly shook the field.
Time 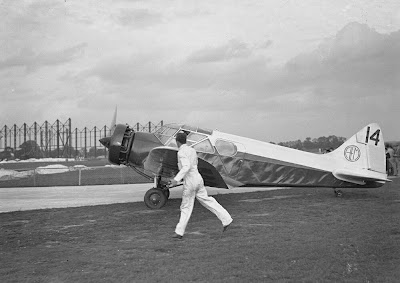 One of the less well known contestants was the Airspeed AS.5 Courier G-ACJL of Squadron Leader D. Stodart, and Sergeant Pilot K. Stodart. 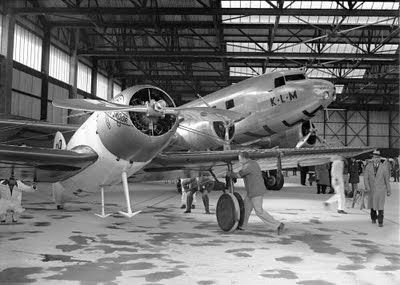 Of the 64 original entries, more than two-thirds had withdrawn. Night before the start Colonel James C. Fitzmaurice, Irish transatlantic flyer, had been disqualified when his U.S.-built Bellanca special, Irish Swoop, proved overweight.
Time 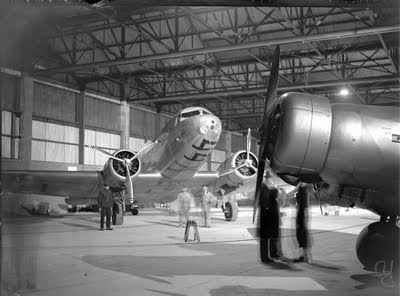 The Dutch entered the Pander Panderjager and a brand new Douglas DC-2, both seen here under guard at night before the race. 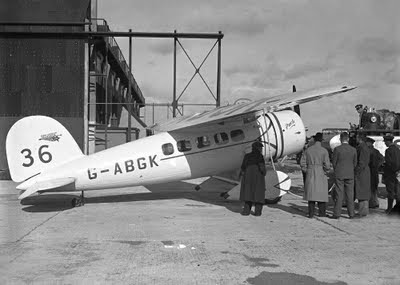 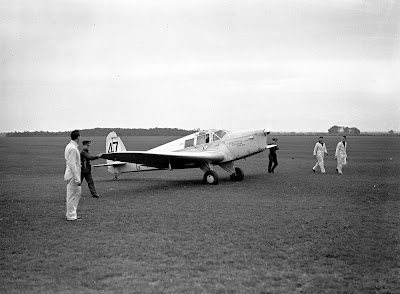 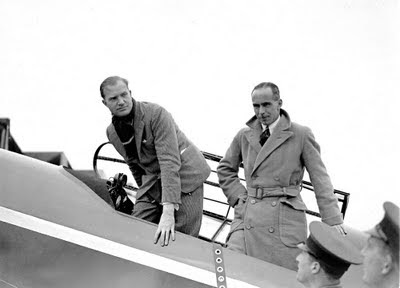 Some men to watch. Above - C.W.A. Scott and Tom Campbell Black, and below, Captain K.D. Parmentier, First Officer J.J. Moll of KLM. 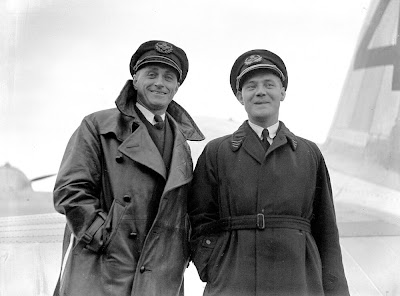 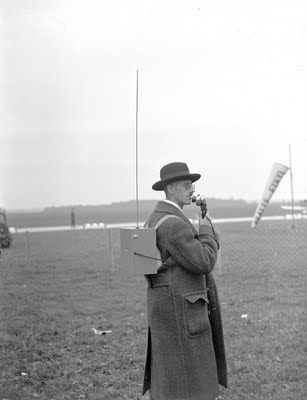 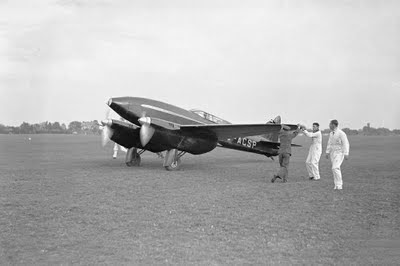 First away were Jim and Amy (Johnson) Mollison, 12-to-1 favorites in their De Havilland Comet. Two minutes later Roscoe Turner and Clyde Pangborn took off in their big Boeing, just as an orange-red sun edged over the horizon. One by one the rest took the air and headed south. Last off, 16 minutes after the Mollisons, was Capt. T. Neville Stack, carrying a complete motion picture of the start.
Time

What happened next was not only a great and thrilling race, but a cornerstone of the development of inter-continental flight.

Hawking a Hawk - or not quite what it seems

A fine pre-war advertisement. But not is all quite as it seems. The first oddity is that Miles were famous for their wooden aircraft. While we are looking at the metal engine cowls, propeller and fittings, it seems a bit odd that British Aluminium would choose a wood aeroplane to advertise their wares!

Then we note it's a Flight magazine advert for the Miles Master which, given the radiator position, is actually the Miles Kestrel, an early design that was developed into the Master, and with a number of detail differences, the critical one being the fact that the Kestrel's radiator block was under the engine in the nose, while the Master's was under the wing centre section. If you know that, you aren't going to mistake one for the other from this angle.

And, for comparison, the Miles Master trainer. 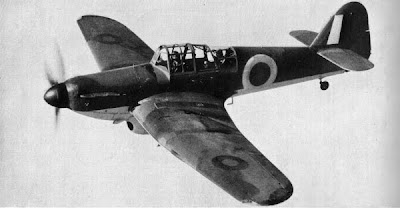 Both elegant designs, and efficient for the job. They were also the RAF's own preferred type that they couldn't get enough of, so the US designed and built North American Harvard (T-6) filled the shortfall. Had history been different, we'd be tripping over Miles Masters on every airfield, rather than those ubiquitous T-6s.

Here's a good Flight cutaway of the cockpit area. I like the instructor's visor and seat could be raised for a better view on landing. I'm not sure how practical that was on circuits and bumps. 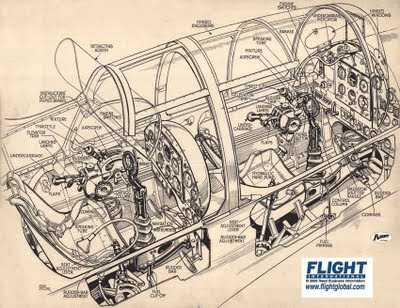 Reproduced, with acknowledgement from Flight Global. A bigger version here.

Again, it's not what it seems. Flight have it listed under 'Miles Master' here yet the lack of a step in the canopy top and the small, upright and un-armoured windscreen don't match the Master but do match the Kestrel.

One last confusion. The Miles Kestrel was powered by - wait for it - the Rolls Royce Kestrel V-12 engine. Both companies named their products after birds of prey, Miles sticking mostly to hawks, Rolls Royce casting wider. One could presume that Miles chose to call this one the Kestrel as they'd not used the name before, and it fitted the engine it had. Intriguingly, I can't think of another aircraft where the engine and aircraft name is the same but the builders were different. I'm sure there must be - suggestions on the comments button please!
Posted by Vintage Aero Writer at 12:28 AM 1 comment: Links to this post

From Australia and Canada to Oshkosh

Sometimes it's worth travelling a long way to see something.

Sometimes that something's travelling quite a way to be there.

Canadian Warplane Heritage Lysander at EAA AirVenture, Oshkosh.
Posted by Vintage Aero Writer at 12:50 AM No comments: Links to this post