Film 'Into The Wind' gets a UK TV release

I'm delighted to hear that Steve Hatton's film Into The Wind, of Bomber Command veteran interviews, has been picked up for UK broadcast on the Yesterday Channel. 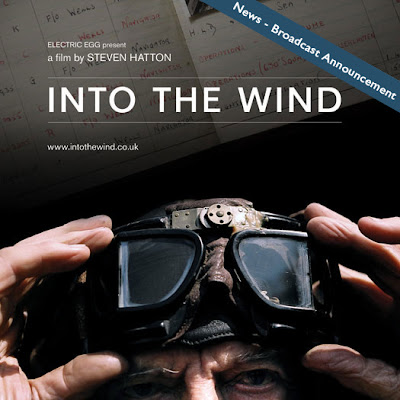 Electric Egg are delighted and proud to announce that our first self-produced feature length documentary, Into the Wind, has been acquired for UK broadcast by the Yesterday channel, part of the UK TV group.

Millions will now see Into the Wind, directed by Steven Hatton, when it airs on the popular digital channel, whose stablemates include Dave and GOLD.

The film is an insightful and touching documentary relating the experiences of Second World War aircrew veterans of Bomber Command through their own words and sadly in many cases for the last time. As well as a document of unique historical value and significance, Into the Wind is a record of deeply personal stories, tales of friendships gained and lost, the perpetual possibility and proximity of death, the importance of love and family, the moral implications of warfare and their shared love of flying.

Into the Wind explores the passion for flying shared by many of the veterans including Adge Boal who pilots a light aircraft over his old operational airbase as he recounts the tragic story of the loss of his first crew. The film also features Bomber Command pilot Ken Wallis who, at the age of 95, still flies his self built and designed autogyros from his home in Norfolk and also Ken Harder, who emotionally revisits his old crew position in a taxi run of a wartime Lancaster bomber. Shot across three continents, the documentary features contributions from former aircrew from across the commonwealth including veterans from Australia, Canada, Guyana, New Zealand, Trinidad and Tobago and the UK.

Into the Wind features a evocative original score by composer Hugh Cowling, previously unseen archive material and is director, Steven Hatton’s first feature length documentary. It will be aired on Yesterday in November 2011 and will also be released on DVD before the end of the year. A seperate announcement will be made about this soon.

Steven, who with Neil Baker founded Electric Egg in 2005, said: “We would like to thank all those who have supported us throughout the making of the film, it has been a long and rewarding journey and we are extremely pleased to make this announcement that these stories will be shared with such a wide audience.”

For more information on the film, trailer, screening times and the DVD release date; please join our mailing list by emailing us or visiting the film's website.

We would also like to point you in the direction of the composer Hugh Cowling's website. Into the Wind is Hugh's debut documentary score and his work deserves a wide audience.

We carried an article by Steve in Flightpath magazine here in Australia [Vol.22 No.4]. Steve touched on many aspects of the story that were, I think, very interesting and thought provoking in a degree such documentaries often are not. One item Steve touched on was the diversity of Commonwealth nations represented, and Steve said:

It was very interesting to hear the experiences of black Bomber Command veterans and their experiences coming to Britain in the 1940s. One veteran, the late Cy Grant, described a very ambiguous relationship with his wartime career and one that he only began to consider and discuss in his later years. Cy flew three Bomber operations before being shot down and spent the rest of the war in a prisoner of war camp. Despite this wartime service he was prevented from following his profession of law at the end of the war due to the colour of his skin. Despite this knock back, Cy ultimately pursued a career in acting, music and writing in which he enjoyed a great deal of success.

This experience of Black Commonwealth crews links back to an earlier post I made on the Tuskegee Airmen, the Black American fighter pilots, here, and particularly relates to a discussion (at the bottom of the post) that occurred afterwards.

But back to Into the Wind. I would highly recommend a viewing of the excellent trailer, here. I hope further screenings, maybe even in the Antipodes, eventuate.